This article was sourced from ebparks.org 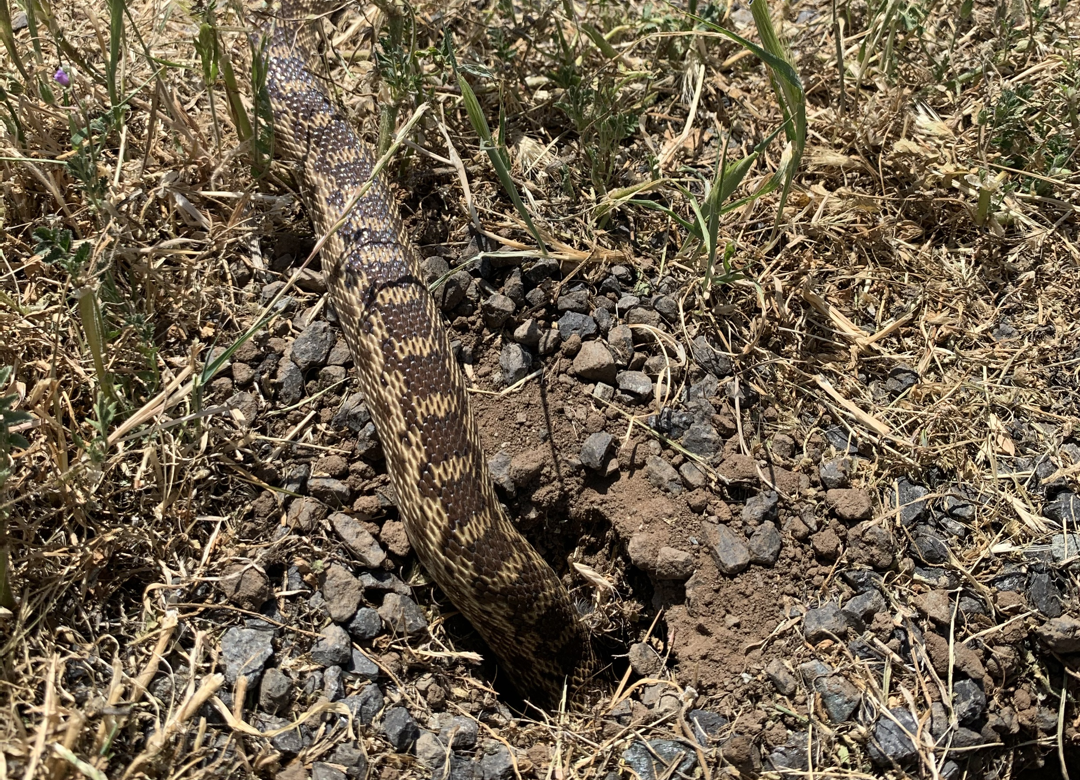 The background color of the Pacific gopher snake is glossy yellow to buff with black, brown, or reddish-brown blotches on the back. The scales are keeled and the tail pointed. Its general coloration and behavior mimic a rattlesnake, but the Pacific gopher snake is harmless. This snake is a good climber and burrower. It lays an average of 6-7 eggs in the spring to early summer, with the young hatching in about a70 days. Length: 36-100 inches. Habitat: They are found in many different habitats throughout California including blue oak, gray pine, and oak woodlands. Pacific gopher snakes are also found in chaparral, grassland, and riparian areas. Food: They eat small mammals, birds, bird eggs, and lizards. These snakes often inhabit the same burrows as their prey.

The general coloration of the northern pacific rattlesnake varies, usually matching the background soil color, with brown or black dorsal blotches. The head is broad, flat, and triangular with facial pits and vertically oriented, elliptical eye pupils. The skin is dull with keeled scales. The tail, tapering with a“rattle,” is made up of interlocking pieces of dry skin. This snake is most active in spring or fall, in morning and evening or at night in warm weather, and is live-bearing with an average of 4-12 young born September to October.

What to Do if Bitten by a Snake

1. If bitten by a rattlesnake, stay calm and send someone to Call 911. The victim should remain calm by lying down with the affected limb lower than the heart. Do Not waste precious time on tourniquets, “cutting and sucking,” or snake bite kits. If you are by yourself, walk calmly to the nearest source of help: another person, a park employee, or a phone to Dial 911. Do Not Run.

2. If bitten by any other kind of snake, leave the snake alone. Wash the wound with soap and water or an antiseptic and seek medical attention.

3. If you are not sure what kind of snake bit you, check the bite for two puncture marks (in rare cases one puncture mark) associated with intense, burning pain. This is typical of a rattlesnake bite. Other snakebites may leave multiple teeth marks without burning pain.

The western yellow-bellied racer has large eyes and a long slender body which is olive-green, blue-gray, or tan on top with a yellow belly. This snake is extremely fast, which is essential for capturing certain prey. The young resemble small gopher snakes except for their large eyes and shiny, smooth scales. This snake lays 12-24 eggs in the early summer.

The coloration of the Diablo range gartersnake varies greatly depending upon the subspecies. The back is usually blotched brown to black with a dorsal stripe. This snake is live-bearing with 7-25 young born late summer to fall.

Length: 18-57 inches. Habitat: Primarily aquatic, they are found in and along streams, rivers, ponds, and lakes from coastal brackish marshes to the high mountains. Food: They eat fish, frogs, salamanders, and mice. This snake is one of the few that can eat the highly toxic California newt.

The coloration of the coast gartersnake varies greatly depending upon the subspecies. The subspecies in the East Bay has a bright yellow stripe down the middle of the back. Bright red or orange flecks or blotches usually present on belly and sides, including side stripes. The scales are keeled. This snake is live-bearing with 4-19 young born July to September.

The northern rubber boa is a stout-bodied snake that looks and feels like rubber. Sometimes called the “two-headed snake” because it’s tail is shaped somewhat like it’s head. It has shiny, smooth skin that can be brown to olive green on top and yellow to cream below. It is usually active at dawn and dusk, but in the spring it is occasionally active during the day. The northern rubber boa is livebearing with 2-8 young born August to November.

Length: 14-30 inches. Habitat: They are found in moist grassland, woodland, and forested areas in and beneath rotting logs and where leaf litter and duff are on the ground. They burrow, swim, and climb. Food: They eat small mammals, insects, and lizards.

The California mountain kingsnake is a colorful, shiny snake with black, red, and white bands and a black snout. This snake is harmless, but is often mistaken for the poisonous coral snake, which is not found in California. Its temperament is a bit nervous and defensive. It mates from April to May and lays 4-8 eggs in the summer.

Length: 20-40 inches. Habitat: It lives in moist, cool canyons of mountainous regions of California, in coniferous forests, and woodlands mixed with chaparral. This is a very rare snake in the Park District. Food: They eat lizards, small snakes, small animals, and bird eggs

The California kingsnake has conspicuous alternating bands of black or dark brown with white or cream. The scales are smooth and shiny. They lay 6-12 eggs in early summer.

Length: 30-82 inches. Habitat: California kingsnakes are found under logs, lumber, and rock outcrops in a variety of habitats throughout California. These habitats include forests, chaparral, grasslands, river bottoms, and deserts. Food: They eat other snakes (including rattlesnakes), lizards, birds, bird eggs, and mice. The California kingsnake, handled here by an East Bay Regional Park District naturalist, is becoming increasingly rare in the Bay Area and should be left alone when encountered.